Design for a Changing Captiva

Adaptation strategy and design for a changing Captiva. 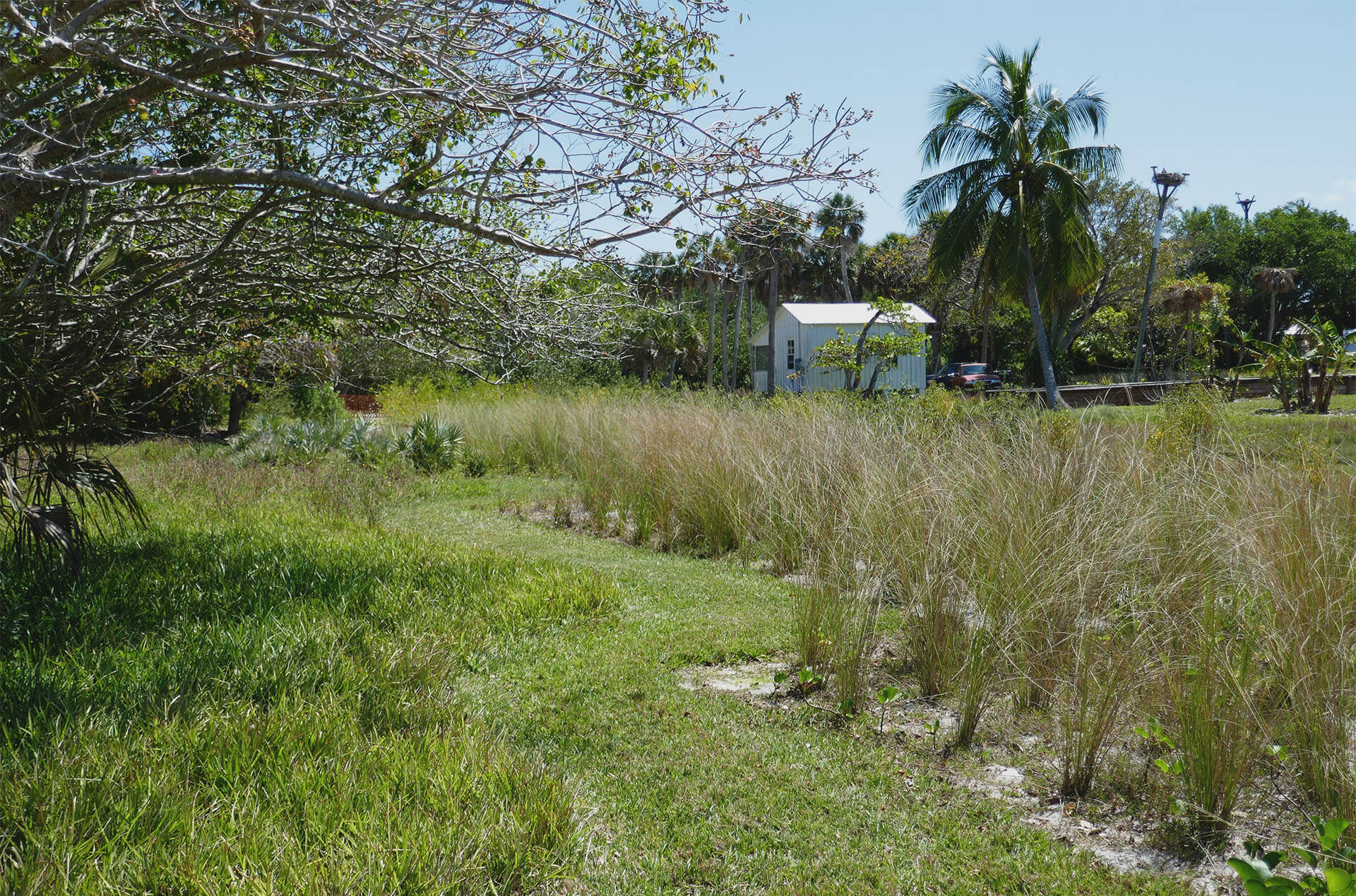 Practice Landscape, in collaboration with WXY architects, EDD hydrologists, and RS Walsh Landscaping, refined the long-term adaptation strategy for the Robert Rauschenberg campus on Captiva, Florida. Working with the Robert Rauschenberg Foundation, the Practice Landscape team first created an ecological assessment of the island-wide conditions, highlighting the temporal aspects of a barrier island, including the increasing impact of environmental change. The final design was a landscape strategy for the unique ecological zones on site: Dune, Jungle, Campus, Meadow, Mangrove. The landscape strategy replaces the fixity of a masterplan by providing scenarios that vary over time, acknowledging shifting plant communities and maintenance regimes, and integrating of  the cultural and ecological landscape.

The Meadow was a large mown lawn bordered by a compacted roadway. Sandwiched between the Mangroves in the bay and the parking lot of a nearby shopping mall, the field oscillated between extreme wet and dry, with increasingly saline conditions.

Rather than fight the wet and salty environment with seawalls and infrastructure the design works with the changing conditions. A plant-based solution transforms low diversity to high diversity, as roots alleviate compaction and young plants adapt to standing water. First, strategic sections of sod that impeded drainage and groundwater penetration were removed. Then, grasses, dune species, shrubs and trees selected for their adaptability and salt tolerance were planted.

The meadow was constructed in spring 2021 by removing segments of the lawn using a sod cutter and planting in sand rather than importing soils. This patchwork approach allowed the ground to maintain some integrity while the new planting filled in.

The design anticipates and leaves room for the migration of mangroves landward as water levels in the bay continue to rise. 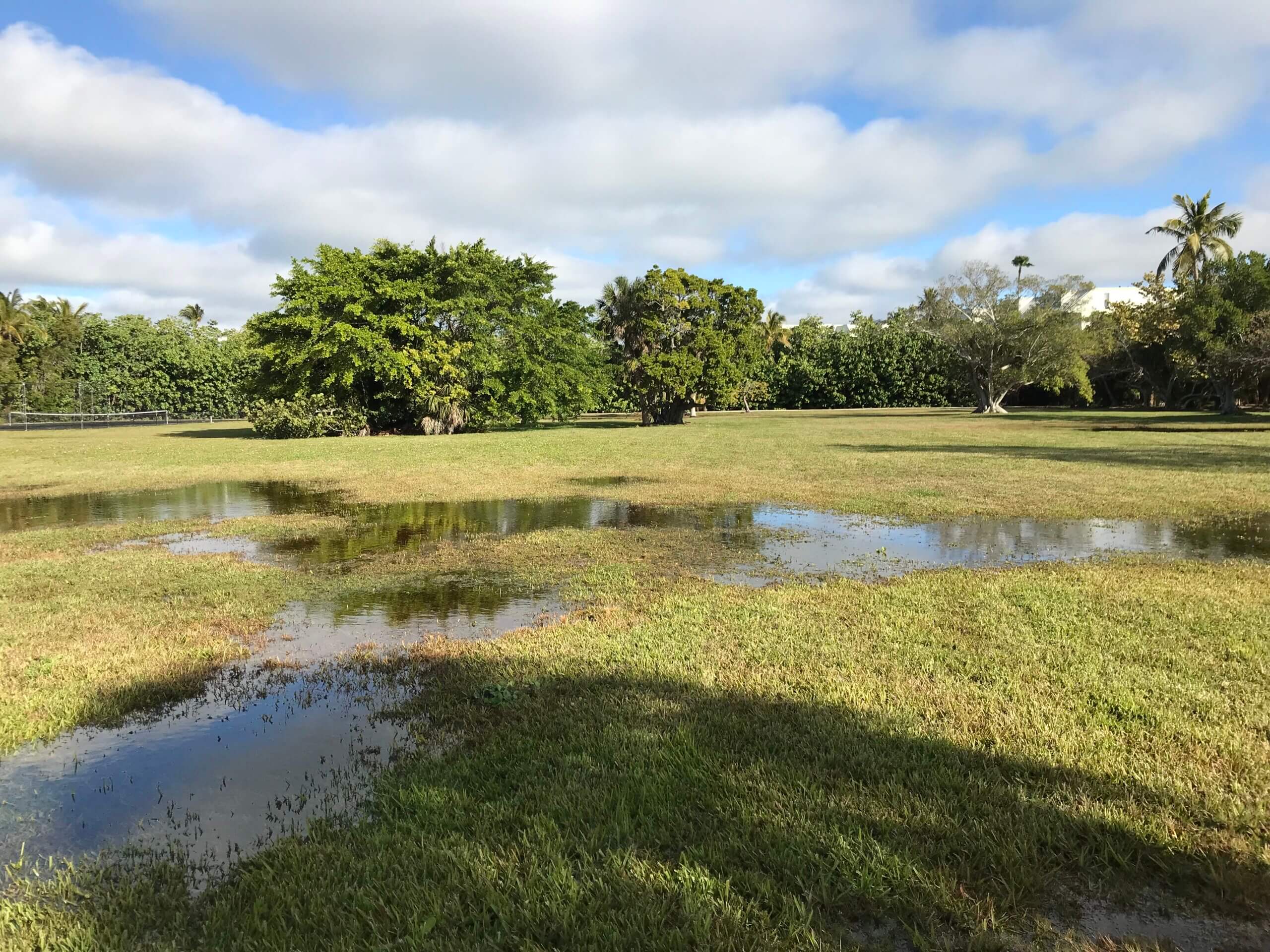 Above (Before): The meadow, then a mown lawn, frequently flooded due to the high water table and extremely low elevation.

Below (After): The meadow planted with salt tolerant grasses, woody plants and trees that can withstand periods of extreme wet and dry. Species that spread or self-seed were selected in order to reduce the need for imported material. 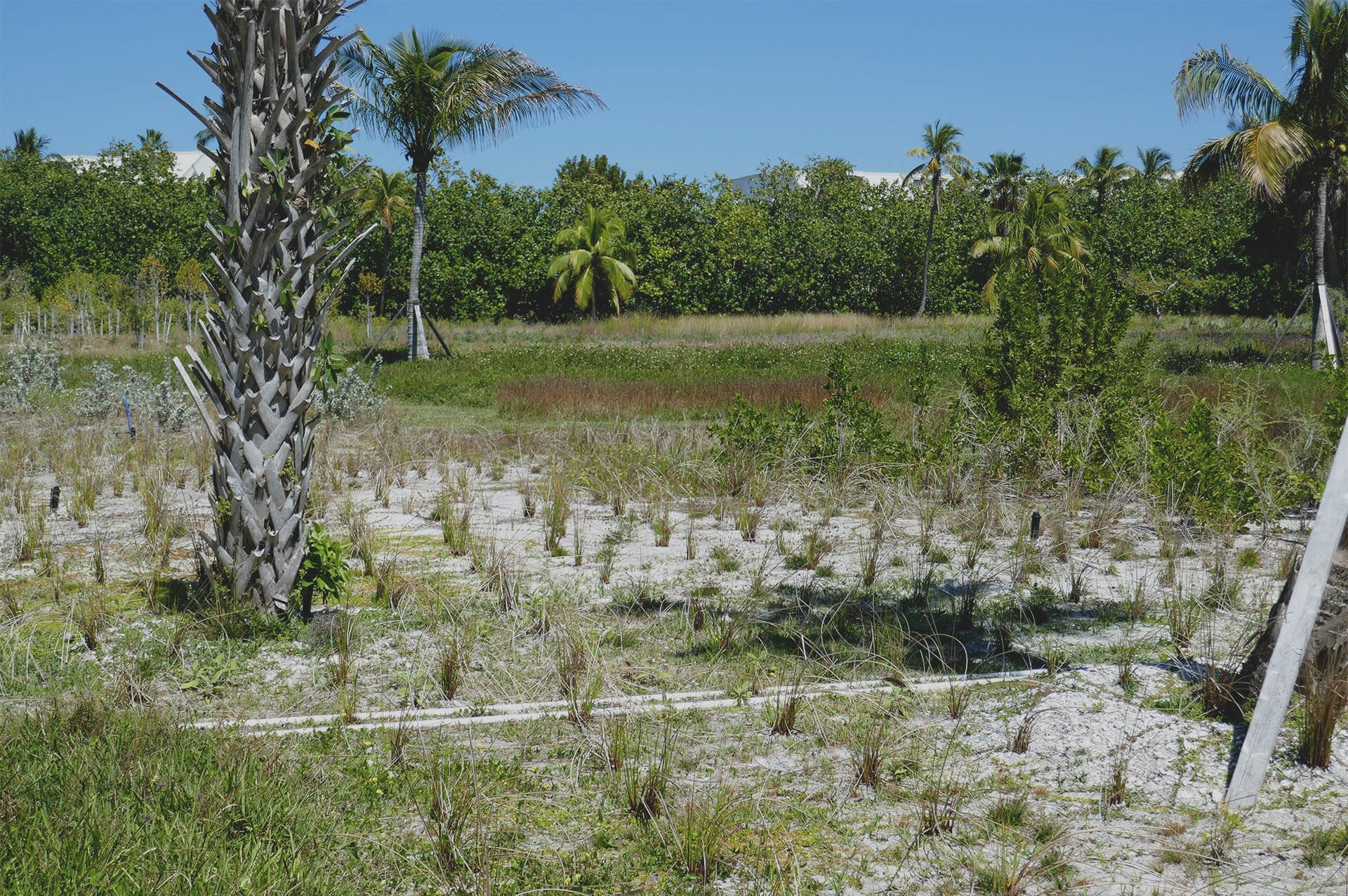 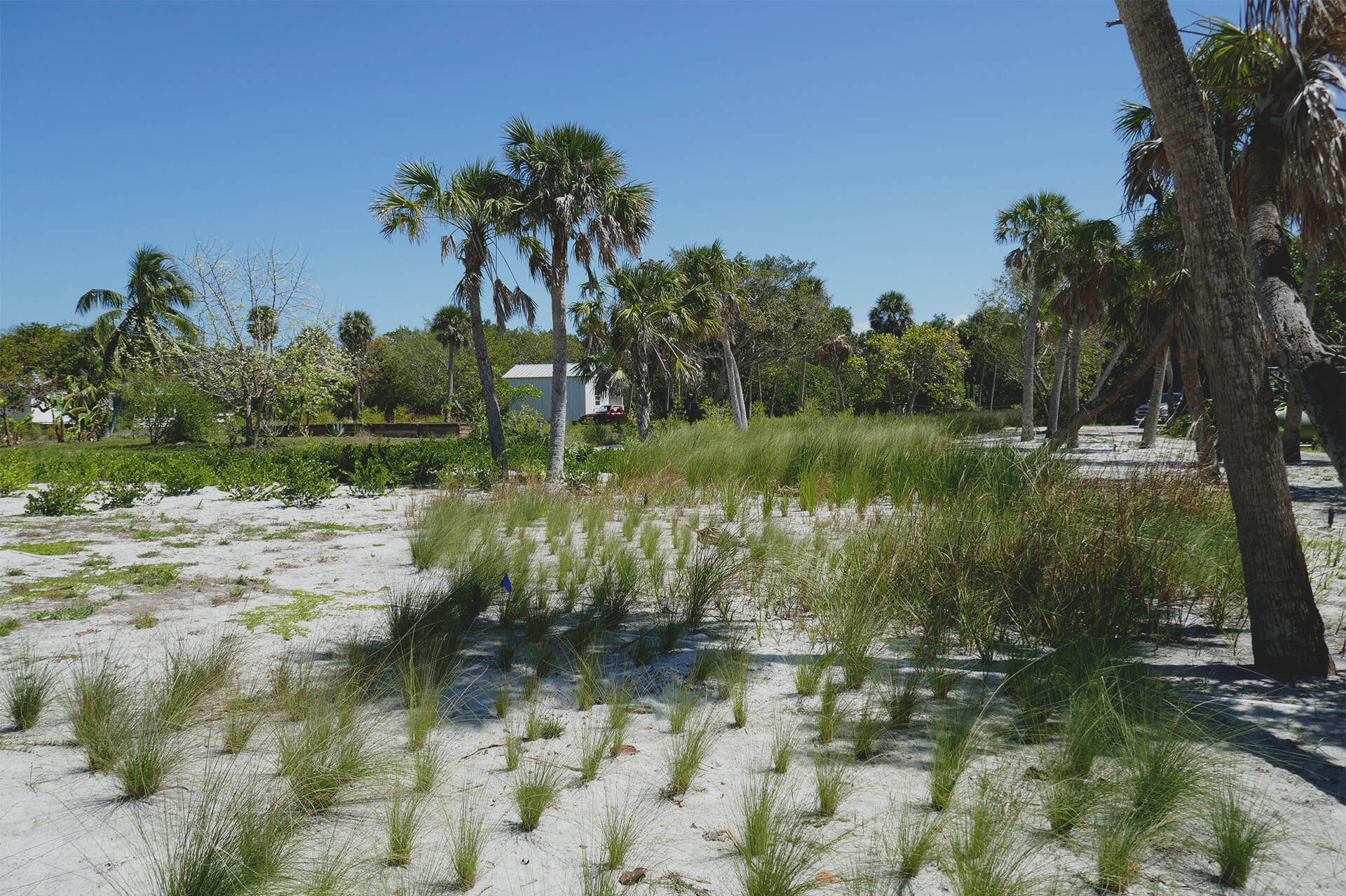 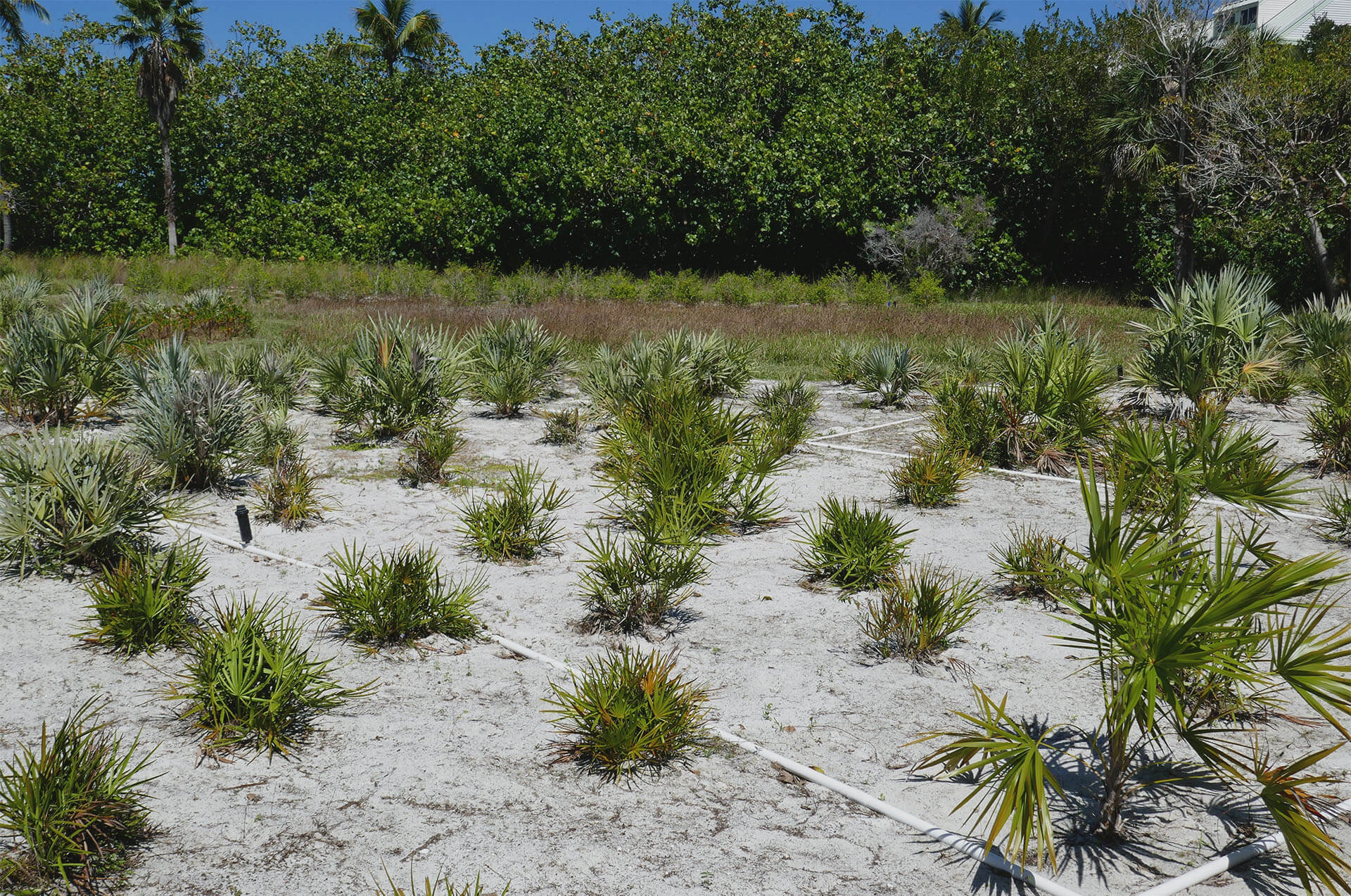 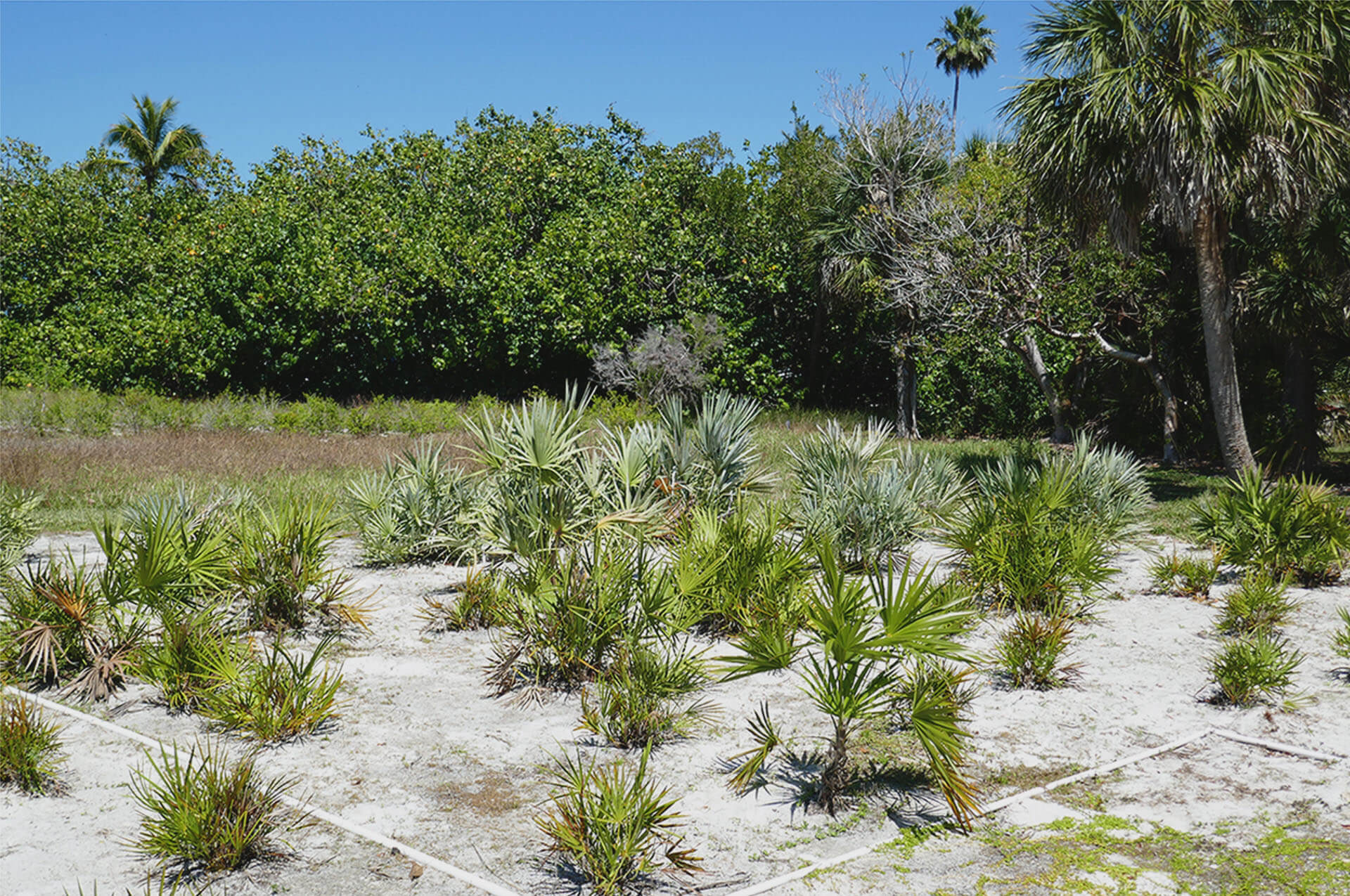 The 4.5 acres Jungle, named by Rauschenberg, is defined by a density of plant life and "the walk", a 900-foot meander that traces decades of travel back and forth across the site. Aggressive species had overcrowded the canopy and created an open site perimeter. The design restored the lush tropical density once associated with the Jungle while increasing diversity within and across biomes by designing with disturbance.

The Environmental Reference Handbook for Sanibel, A Barrier Island Sanctuary states "The Australian pine (Casuarina sp.) is designated as a non-native invasive species by the State of Florida and may not be planted anywhere in the state." It continues, "Shallow-rooted Australian pines seed themselves readily on disturbed land and beaches, creating a monoculture that significantly limits and stunts the growth of healthy native vegetation."

But, as Peter Del Tredici says, "Life is always a continuum and dichotomies typically represent the extreme ends of the continuum, and fail to capture the gray area in the middle.  As is typical with most dichotomies, “native” and “exotic” are overly simplistic and judgmental." So the design took two distinct approaches to the Australian pines: the pine stand in the Dune that had great cultural significance were kept in place, while the pines within the Jungle were removed because they had a detrimental effect on the surrounding vegetation. Removal and reuse then become a part of the design. With all parts of the pines sorted by size and reused as construction material or mulch.

This process continued with a focus on reusing, transplating and storing all plant material on site. The cabbage palms  (Sabal palmetto) below were transplanted from across the site to create a palmetum in the Jungle. 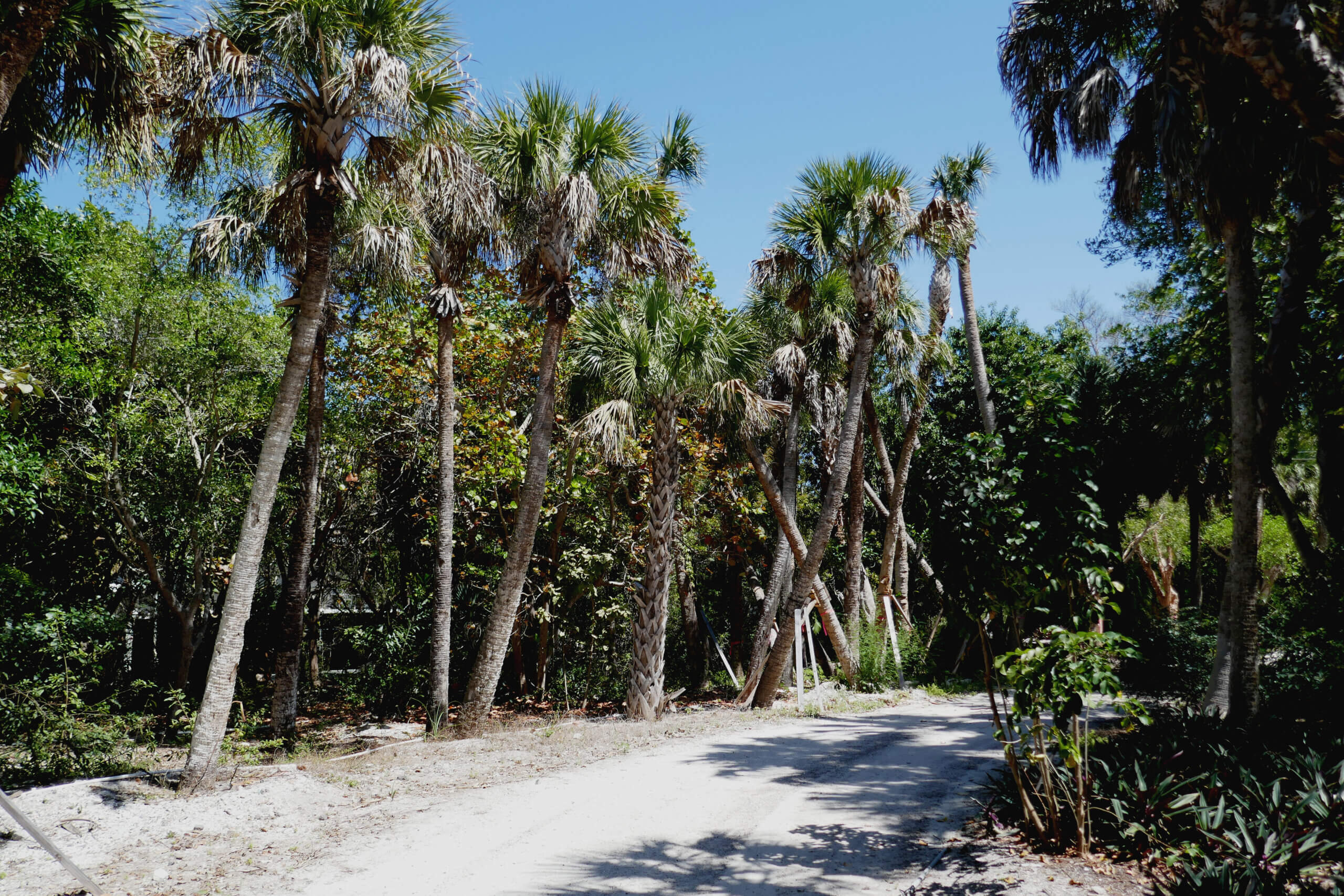 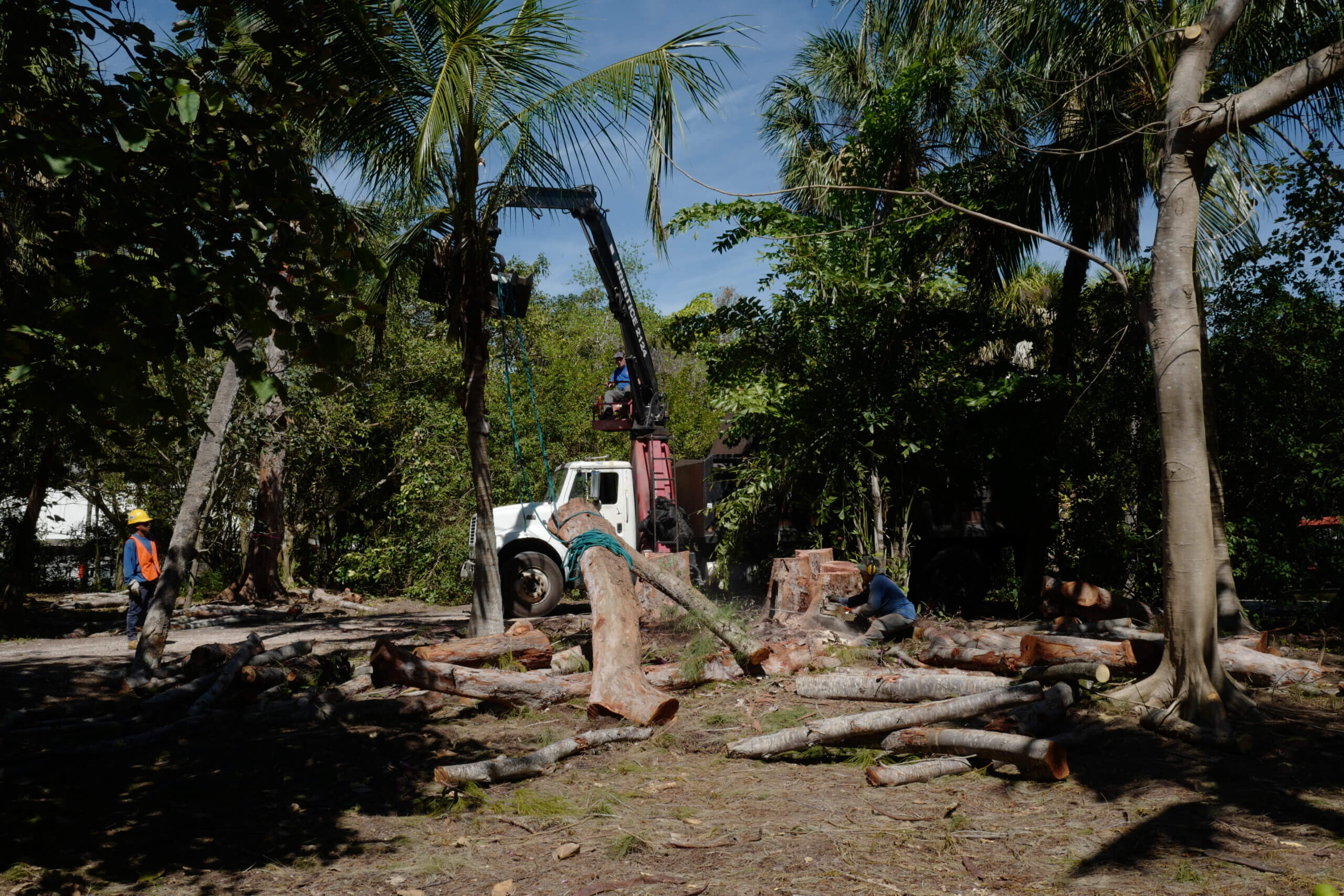 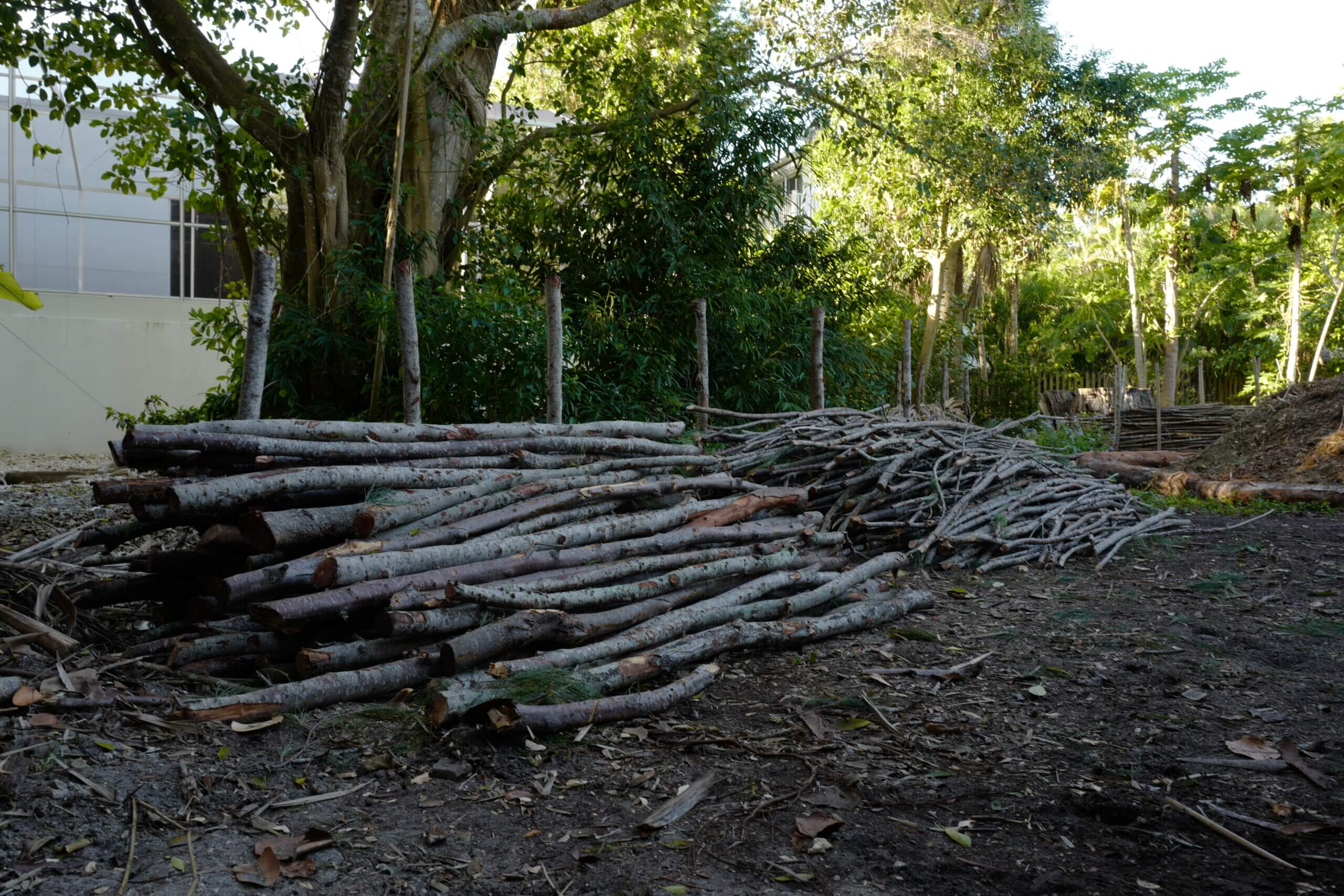 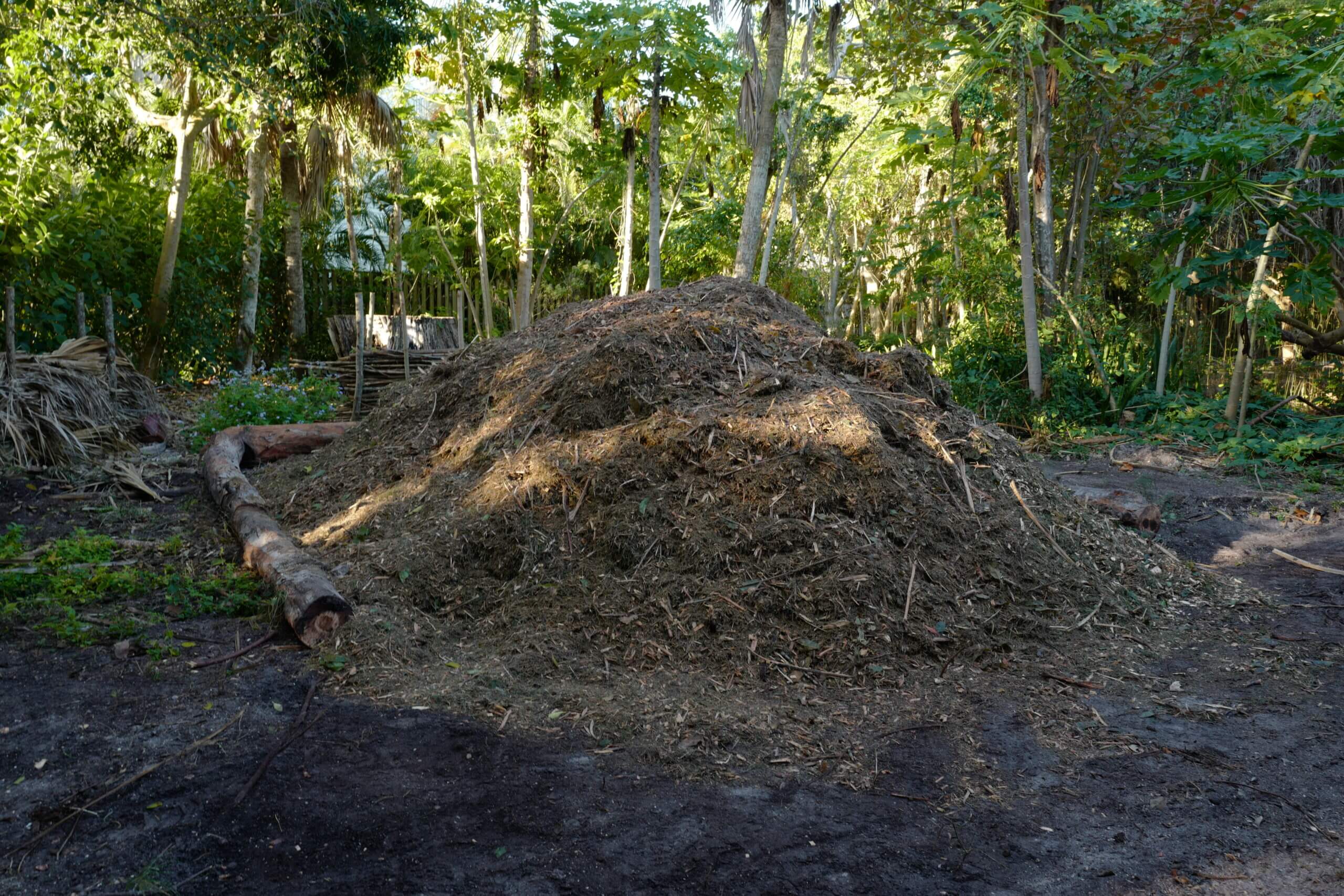 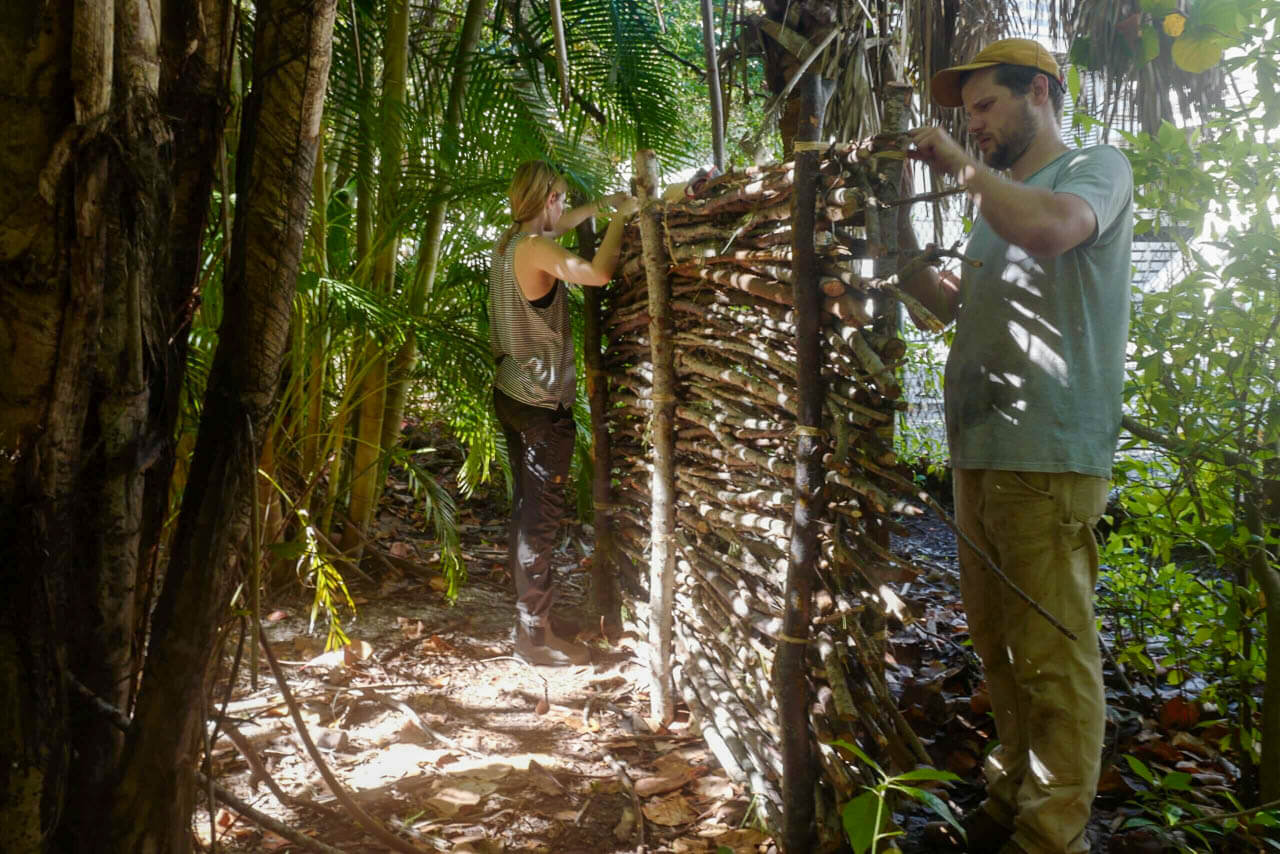 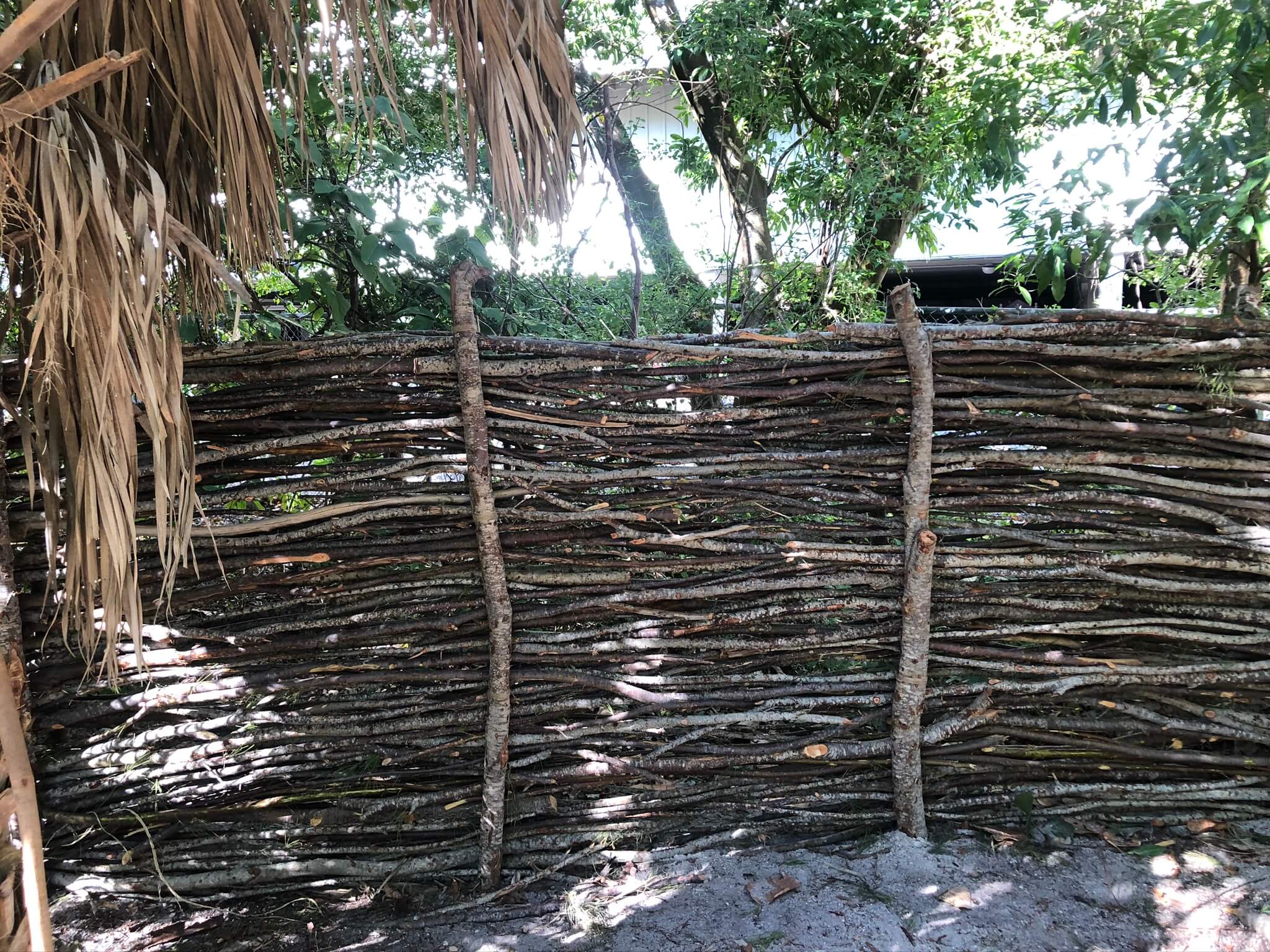